Your cattle are your livelihood, and you do everything you can to keep them healthy and safe. You may even have them insured — which is fantastic! A standard livestock insurance policy in Montana will cover injuries and losses caused by wind, fire, and lightning.

But that’s all a standard cattle insurance policy will cover.

While wind, fire, and lightning aren’t uncommon, they aren’t the biggest risk to your herd. Here are six cattle insurance coverages in Montana you may think you have — even though you don’t.

Cows enjoy water for several reasons. Wading in shallow water can help keep them cool on especially hot days. Water also discourages any biting or irritating insects. Some cows have even been known to swim, though it is rare.

However, bodies of water can pose a severe danger to your cattle, especially if they’re man-made bodies of water. The steep sides of pools, large irrigation ditches, and some artificial ponds make it difficult, even impossible, for cows to climb out. 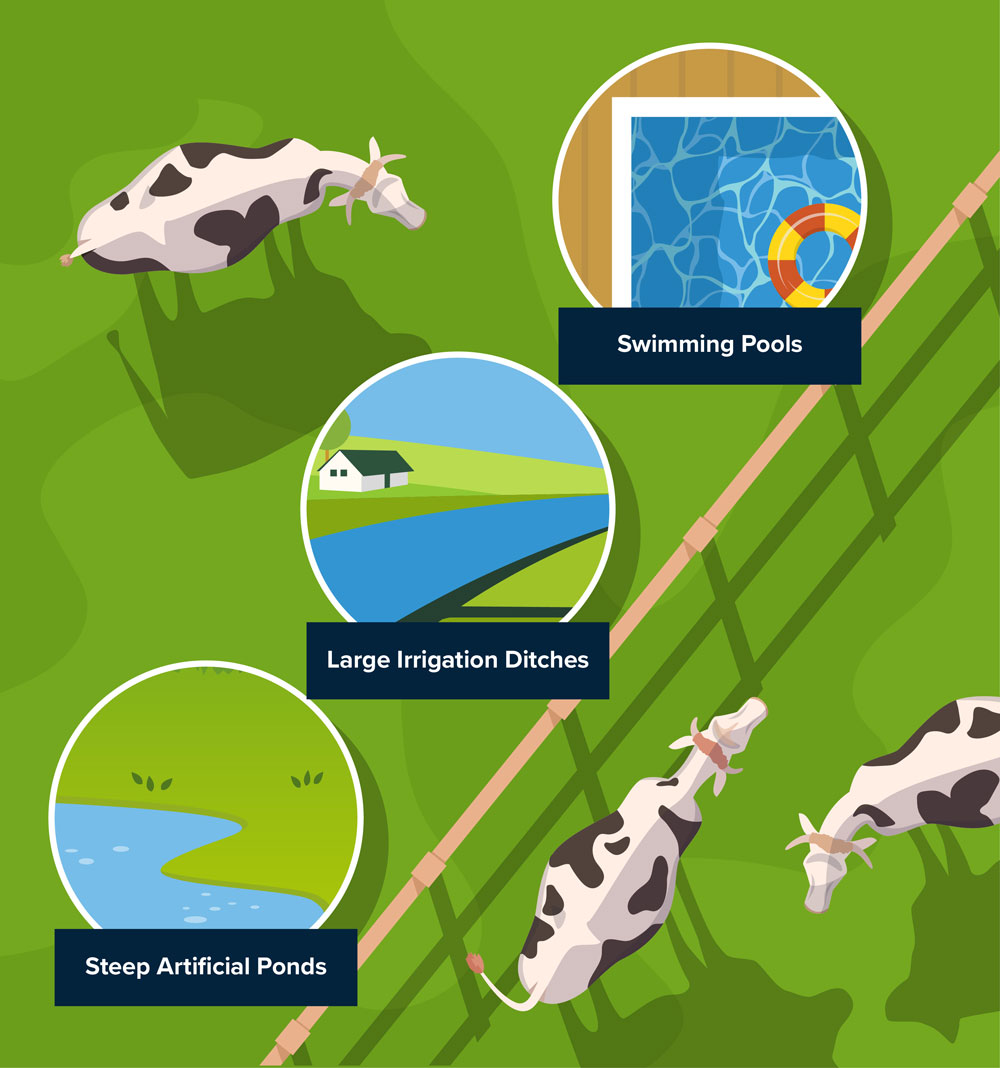 So, when cows fall into steep-sided bodies of water, they’re very likely to drown, which isn’t covered by a standard Montana cattle insurance policy.

There are ways you can minimize the chance of one of your cows drowning, aside from insurance. One of the best methods to prevent drowning is installing fencing around pools and ponds and along steep irrigation ditches.

Every year between 2017 and 2019, a new Montana record was set for the number of cattle payouts made because of predator attacks — specifically attacks from mountain lions, grizzly bears, and wolves. In fact, in 2019, large predators killed 352 head of cattle in just ten months.

That said, not every attack is actually an attack — and yes, that does sound confusing. Sometimes, what first appears to be an attack is a scavenging event. The cow died before the predator even came along. Because scavenging and attacks can be difficult to tell apart, the insurance claims process for cows lost to predator attacks is usually extensive.

Aside from bolstering your cattle policy, there are many ways to prevent cattle predation, including:

Accidental shooting is uncommon and almost always limited to the hunting season. Typically, a hunter either mistakes a cow for a deer, or the hunter is a lousy shot. Even if you don’t allow hunters on your land, neighboring properties might allow hunters on their land.

To put it simply, bullets don’t care about property lines.

Collapsed buildings often happen very unexpectedly, but there are common causes for collapse — the most notable reason being long durations of poor weather. For Montana ranchers, the weather most likely to collapse a building is heavy, wet snow that easily sticks to the roofs of structures such as barns or cow shelters.

This doesn’t mean you need to get rid of the buildings associated with your ranch. They all have an essential purpose and can help shelter your cattle during poor weather.

Instead, have an inspector come in and look at your structures. Make sure your buildings are up-to-date and meet your current local building code. During the winter, consider hiring a snow removal company to remove snow from your roofs following large storms.

Each season has its challenges for cattle. However, winter poses some of the most extreme threats. Cows can survive cold temperatures by growing a thicker coat and adjusting their metabolism levels. However, freezing temperatures aren’t the only problem.

During winter storms, when visibility is low, it’s nearly impossible to make out your surroundings. It’s just the same for cows. So, when they travel in search of shelter, they can’t pay much attention to their surroundings. If a herd wanders onto a frozen pond or lake, the ice can easily crack and cause your cattle to fall through.

In 2015, two South Dakotan farmers lost approximately half their herd after the cattle fell through the ice of a frozen-over pond. The lost cattle were valued at around $300,000 and the owners had no insurance for their herd.

6. Freezing/Smothering in Snow or Ice Storm

For cattle, low temperatures aren’t the only thing that cause cold stress. Significant factors of cold stress are blowing wind and snow during intense winter storms. To give you an idea of how much wind affects temperature, a 20 mile-per-hour wind is equivalent to a 30° Fahrenheit drop in temperature.

In early 2021, ranchers in the south were fighting to keep their herds alive during the unexpected cold snap. Some herds were in the middle of their calving season, and the weather posed a severe danger to both new calves and their mothers. In Oklahoma, one farmer reported multiple newborn calves with frozen ears, tails, and feet. A Texas rancher described losing ten cows in a single week because of the frigid conditions.

Obviously, winter can be a serious threat to cattle and ranches. A winter perils insurance policy or rider can give you peace of mind for your financial losses. Additionally, there are other ways you can try and mitigate the loss of your cows.

One of the best ways to prevent cold stress in cows is to provide plenty of windbreaks. A windbreak can be as simple as some evergreen trees scattered across a field. You could also take things to the other extreme and provide a fully heated barn. Many ranchers opt for a middle ground and offer their herds open-faced lean-to’s for the cows to huddle under during severe winter storms.

You know the risks your herd faces better than anyone else. It’s just as important for you to know whether you’re adequately protected against those risks.

One of the ranchers I work with learned this lesson a couple years ago. He’d never had more than a few claims per year and many of his cattle insurance limits were best estimates. Then, a winter storm struck.

In one storm, over the course of a single night, he lost $96,000 worth of livestock. Even worse, his claim nearly went uncovered because it was almost 80% over the recorded value of his herd. He was one cow away from a rejected claim.

Since then, he has done a yearly head count of his herd to make sure his insurance limits accurately reflect his cattle and their risks. Inflation and its Impact on Insuring Your Equipment