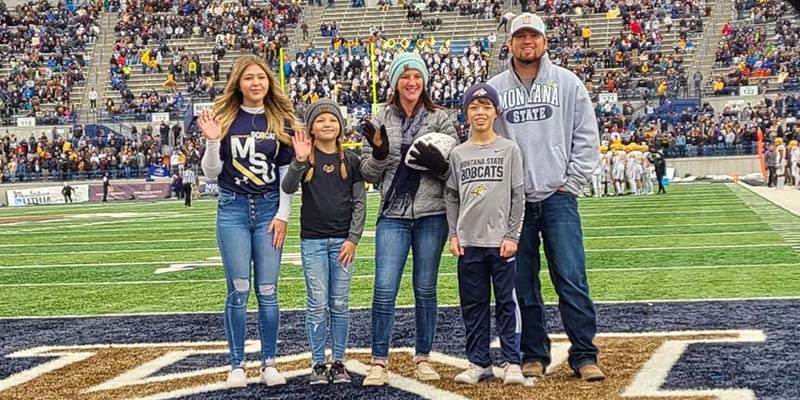 “It was awesome to be honored as a Bobcat Community Hero of the Game. I love serving my community and am grateful for the company culture at Leavitt Group that supports my involvement.”

I was always looking for a place to call home professionally. It was like a mythical thing until I found Leavitt Group. My desired quality of life perfectly aligns with Leavitt Group. I would have never imaged there was actually a company out there that says what they mean and means what they say. They care about me personally, professionally, and create an atmosphere that aligns with that.

I studied business at Montana State University and have worked in the insurance industry for almost a decade. Prior to that, I was an account executive for Town Square Media. I have served on the boards of the Toole County Forward and Sweetgrass Development and I am the chairperson for the Toole County Republican Central Committee. In 2019, I was named as a Leavitt Group Top 10 Producer and as Leavitt Great West’s Commercial Lines Producer of the Year.

I grew up in Shelby, Montana, the youngest of six children. My husband, Garrett, and I are raising three children and reside in Sunburst, where I am the mayor of our town. It’s just nine miles south of the Canadian Border. I love to be involved in the community and give back every chance I get. I enjoy playing golf, softball, and following my kids sporting events.

Holly In the News

A new program in Toole County that aims to help struggling business owners.

Book an appointment with Holly 6 Cattle Coverages You May Think You Have — But Don’t

Book an appointment with Holly